Rambling On About Anchovies and Art

'Write about what you know' is good advice. So is 'paint what you see.' In my case, though, my mind's eye occasionally sees folks like the ones at that little get-together you see on your right.

They look interesting, but what they're doing - it's the sort of thing that happens occasionally. Someone organizes a little get-together, everything's going fine: and then someone orders a pizza.

The scenario is fine, as far as it goes, but there's not much of a 'story' there. At least, not one that occurred to me.

On the other hand, I've learned that I can usually crank out a weekly snapshot taken from my imagination. That's been showing up on another blog, Apathetic Lemming of the North, hosted by my flannel-wearing alter ego.

My non-fiction writing is chugging along just fine: mostly two posts a week, each Friday and Sunday, on A Catholic Citizen in America.

Okay, I've done the shameless self-promotion — except mention that my art is available as photo and canvas prints, up to poster size; and occasionally on gift cards.

That's at Brian H. Gill's Shop on the DeviantArt.com website. The site's name may be off-putting, but I've found some quite talented commercial and amateur artists there. Not in my shop, though: that's just my stuff.

I had something in mind when I started this post. What was it? Writing, paint, pizza: right!

I'm dusting off an old 'slice of life' idea I had, years back, that might turn into something readable. Then again, maybe not. I won't find out until I give it a try.
Posted by Brian H. Gill at 10:18 AM No comments:

From the Mind of the Lemming: Night Flight 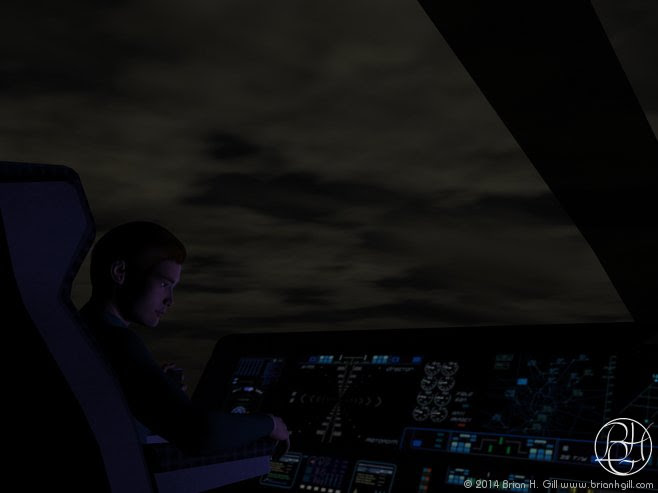 Humans are adaptable critters. Or perhaps the Lemming should say "adapting."

For example, although they've got top-rate color vision and see well enough to avoid trees at twilight, humans are most sincerely not nocturnal. But instead of accepting a role as day-dwellers, they keep developing new ways to stay active: no matter where a sun is relative to the local horizon.

They do, however, seem to like feeling "in control," even when the actual work is getting done — and quite well — by their tech.

The Lemming recalls a time when a train's "driver" didn't tell the train's AI that he was stepping out of the vehicle — and ran after the train as it left without him.

Email ThisBlogThis!Share to TwitterShare to FacebookShare to Pinterest
Labels: the human condition

Writing a post for another blog, A Catholic Citizen in America, my mind took me off on an tangent. Nothing unusual there.

It's almost on-topic for that post, but not quite: and the excerpt is a better fit with this blog.

One of the very few 'UFO' reports that I think could plausibly involve extraterrestrial intelligence happened in northwestern Minnesota in 1979.

No, I do not think this is proof that We Are Not Alone: but the report is intriguing.

As a writer, I can imagine a story from the point of view of the space aliens: deputy sheriff Johnson could have startled the jittery crew of a vessel, maybe one that wasn't supposed to land in the first place. The alien equivalent of an Air Force AB shot at the patrol car before the commander could stop him/her/it: making a bad situation much worse.

What happens to Airman AB Glipnarf may depend on how many forms the commander needs to fill out; and whether the landing was the result of equipment failure, botched navigation, or something else.

Now I really should get back to work.

I do not collect information on individuals visiting this blog. If you leave a comment, I'll read what you wrote: but I don't keep a record of comments, apart from what Blogger displays. (In other words, the only record of what you write or who you are will be what people see at the bottom of the post.)

I do collect information about how many hits this blog gets, where they come from, and some technical information. I use the WebSTAT service for this purpose - and all that shows is which ISP you use, and where it's located.

You can stop most of Webstat's data gathering by disabling cookies in your browser. I don't know why you would, but some folks do.

I'm also an AdSense affiliate, so Google collects information on what I've written in each post: but that's mostly my problem.

I'm also considering starting an affiliate relationship with DAZ Productions. You should be able to keep DAZ and Commission Junction, their provider of affiliate services, from collecting information by - again - disabling cookies in your browser.

And you can keep DAZ Productions from finding out anything about you, by not buying any of their products.

Again, I don't know why you would: but some folks do.

Small town life, the way it never was

Grilling year-round with simple equipment and almost no skill

Basically, I don't collect personal information about folks who visit this blog.

If you're really interested, I rambled on about my privacy police at the bottom of this column.

Like so many others, I'm on MySpace:
myspace.com/smalltowndad,
Brian Gill

Brian H. Gill
I'm sixty-something. My wife and I have six kids, four surviving, and one grandchild so far. A central Minnesota town home has been my home for the last few decades. My wife's a 'cradle Catholic,' I became Catholic as an adult. I take my faith seriously, but not grimly. I mostly read, write and make the occasional digital picture. Not necessarily in that order.

View my complete profile
I think this blog is pretty good, but your opinion may vary. Want to rate it? Here's your chance:

Unless otherwise noted, material in my blogs is copyright © 2007-present by Brian H. Gill. All rights reserved. It may not be published, broadcast, rewritten or redistributed in whole or part without express written permission. Fair use is permitted, including short quotations, links, and extracts used in search engines.

Following Catholic beliefs and practices in America: One man's experience

A view of the war on terrorism, by a former historian and English teacher living in outstate Minnesota

Micro-reviews, plus the occasional rant, daily: Technical difficulties, the nature of the universe, and whim permitting

Grilling year-round with simple equipment and almost no skill

Small town life, the way it is in this central Minnesota town

A Webcam's blog
From the heart of darkest Minnesota: my view of small town America